The spring morning on March 6 for the female half of the Kazmedia ortalygy television and radio complex began with a pleasant surprise – more than 100 musicians from the capital Philharmonic met the girls. 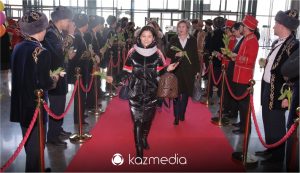 Artists of the Kazakh Orchestra, Brass Band and Folk Music Ensemble “Saryarka” performed works of different music styles: classical, retro, folklore, jazz, rock and pop. Each lady who came in to the sounds of the orchestra walked along the red carpet and received tulips from men in national costumes. 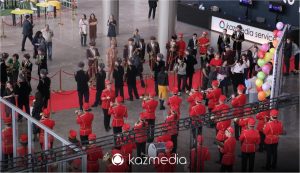 “At present, the building of the Kazmedia Ortalygy television and radio complex currently employs more than 1000 women. We often see leading girls and journalists on television, but engineers, cameramen, directors, producers, employees of administrative and economic divisions remain behind the scenes, and the quality and uninterrupted operation of the national broadcast depends on the work of many of them. On this day, together with the capital Philharmonic, we wanted to congratulate our colleagues on the upcoming International Women’s Day and to express appreciation for their professionalism, ”- shared  Lyazzat Zhunusova, General Director of the Kazmedia Ortalygy.

In today’s peacetime, we remember and honor all those thanks to whom we can work calmly, create, enjoy success, make…

Happy Defender of the Fatherland Day!

We sincerely congratulate our men on May 7 – Defender of the Fatherland Day! We are always proud that you…

Phone for making an appointment